Potato Photographer of the Year 2020 has just announced its winner and runner-ups. Yes, you read that well, there is a competition for the best photo of potatoes. And yes, it’s as amusing as it sounds. Who would have thought a simple potato could bring out so much creativity in people?

The unusual competition was founded with two noble goals in mind. One is to collect money and help Trussell Trust to provide food for people in need at this time of crisis. And the other is to help photographers push their creative boundaries and have some fun in lockdown.

There have been top ten images announced, and the overall winner is Ray Spence with his amusing photo of a potato getting a lockdown haircut. He will receive over £1,000 in prizes. These include a Fujifilm X-A7, a year’s membership of the Royal Photographic Society, a one to one workshop with photographer Benedict Brain and three years of Photocrowd master-level subscription.

© Ray Spence: End of Lockdown (1st place) – “At last – a visit to the hairdressers at the end of COVID lockdown”

If you were wondering about the inspiration behind the contest, it’s not potato cameras or anything like it. It was inspired in part by the photo of a potato taken by photographer Kevin Abosch that sold for $1million in 2016.“We didn’t quite raise a million bucks I had secretly hoped for,” says competition organizer Benedict Brain, “but the few grand we did raise will go a long way to help provide much-needed food for the Trussell Trust. And there seems to be a healthy interest in running another competition next year.”

Take a look at the runner-ups of this unusual contest. You can check out more photos here and learn more about the contest by visiting its website.

© Amy D’Agorne: Tight Market Specifications (3rd place) – “Potato agronomy is changing, raising the need for new solutions to old problems. In an environment where pests, weeds and diseases have no regard for the pressure to meet tight market specifications Bayer is committed to helping you produce quality crops that are also profitable to grow.” – Bayer, 2019
In Peru, the birthplace of the potato, indigenous women sometimes use fine slices of potato peel as a facemask to soothe and soften the skin. I was meant to be working with an indigenous NGO in the Andes when Covid broke out so since I couldn’t try this in the Andes themselves, I decided to try this technique out at home and made a self-portrait documenting the process.
I was simultaneously reading about the history of agriculture and the development of large agribusiness, specifically about the corporation Bayer, now one of four major agrichemical business in the world, a company that owns 80% of all commercial seeds on the planet. The report that I was reading was released by the CIA in 2001 and discloses information about Bayer (then known as IG Farben) and their despicable involvement in Nazi Germany.
I rang up the Crop Science branch of Bayer that is based in the U.K. and was shocked to hear that the company still uses and promotes the use of glyphosate on British potatoes. Glyphosate, a chemical that the company Monsanto, which was bought up by Bayer in 2011), sold in their ‘Round-Up’ product, a product they, and now Bayer is being sued by consumers for giving the users of the product various cancers and autoimmune diseases.
I was fascinated by the obvious dichotomies and differences that there are when looking at the relationship that indigenous peoples have with their food and the relationship that western ‘developed’ countries and companies share with their food.
Indigenous peoples make up less than 5% of the planets human population, and yet they are protecting 80% of its diversity. And only 100 companies are responsible for 71% of global emissions.
This image investigates the relationship between natural remedies /the close relationship some people have with their food and the big companies/corporations that take advantage of that natural knowledge to expand on market specifications.”

© Peter Hubert: Planting Jersey Royals (5th place) – “Every winter the fields in Jersey are ploughed in preparation for the planting of the Island’s main cash crop, Jersey Royals. As a Jerseyman I have been endeavouring to determine and photograph some of the things that we take for granted but are intrinsically and distinctly part of the fabric of Jersey life, cultural reference points that fellow Islanders would instantly recognise and instinctively understand. The planting of potatoes by migrant workers has been a feature of the farming community since the 19th century. Over the years some have stayed and many families include forebears who originally arrived as seasonal farm labourers.”

© Tova Krentzman: Untitled (6th place) – “A portrait of individuals, together yet very much alone….and the unifying task of the mundane that is also beautiful….much like the character of the potato (mundane and glorious in its basic state and potential).
Together, alone, under a mundane task of peeling potatoes. During these past months of lockdown, the story of individuals; each from a different country, with their own interests and commentary…sharing space. In this depiction, they are united by the potato.” 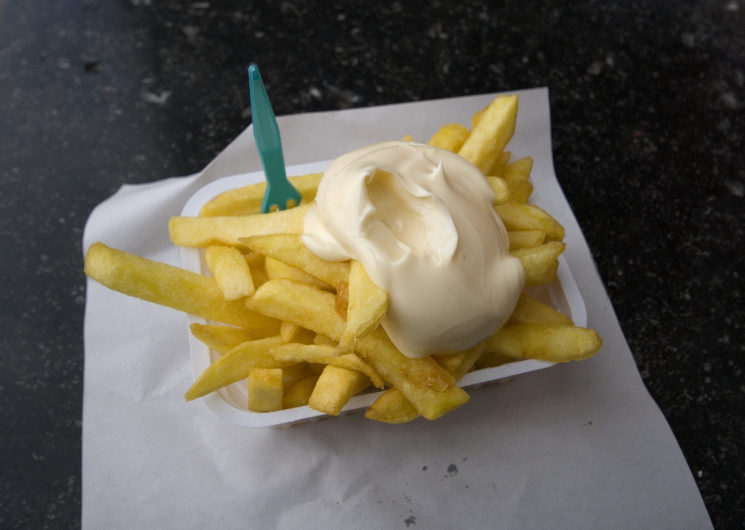 © Amy D’Agorne: 2030 (9th place) – “The year; 2030. Climate change and a rise in food shortages have prompted the U.K. Government to encourage all citizens to start growing food within their back yards. Gripped by the mass hysteria, the protagonist, with a colander on her head to protect herself from her own erratic fears of 5G, tries to plant potatoes in her concrete-lined back yard. As one of the hardiest food crops, they may be her only chance of survival.”

© Jodie Krause: Apple of the Earth (10th place) – “This photograph depicts an interpretation of Adam and Eve. Subsequent to COVID-19, humans have been denied many temptations such as contact and intimacy. However, it has also provided an opportunity for the world to ‘reset’ and renew. The potato is a staple food enjoyed around the world and therefore epitomises the fundamentals of life. Moreover, potato in French, ‘Pomme de Terre’, directly translates to ‘Apple of the Earth,’ highlighting the importance of the potato since it is likened to a fruit associated with re-birth. Therefore, my photograph is focused around the creation of Adam and Eve, who herald the start of a new world by holding a potato.”