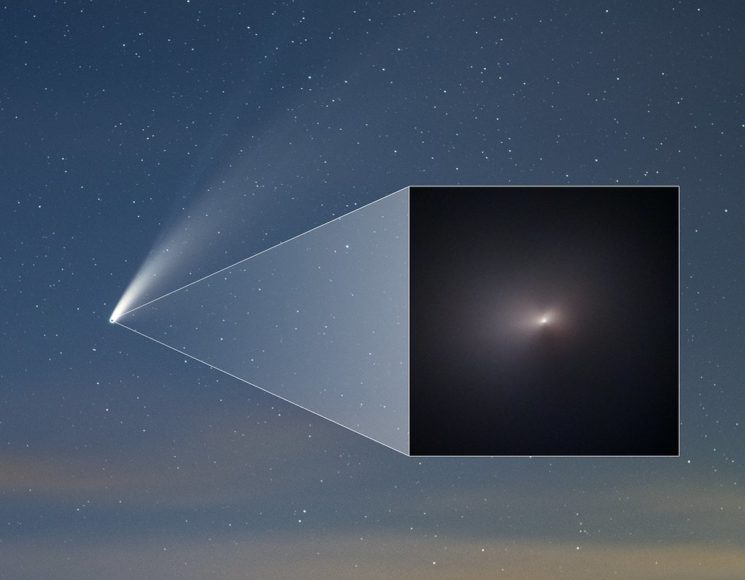 Over July and August, comet NEOWISE became the “Holy Grail” of many photographers out there. I also had my own attempts to capture it before it goes away for another 6,800 years. It was uncertain whether or not the comet will survive its Sun flyby and return for our descendant to observe. But according to a recent image made with Hubble telescope, NEOWISE has survived and will be here for our children’s children’s children’s… children to observe.

The comet with the full name of C/2020 F3 (NEOWISE) was first spotted on 27 March by NEOWISE spacecraft. It was bright and approaching the sun at a fast pace. “Because comets are made of ice, they are fragile,” says Qicheng Zhang, a graduate student at Caltech who studies comets. “We weren’t entirely sure whether Comet NEOWISE would survive the journey around the sun.”

Caltech explains that comets’ icy mantles evaporate as they travel closer to the sun, causing the dust escapes to create long tails. The same thing happened to NEOWISE, and at one point its tail stretched more than 10 degrees across the sky. For comparison, it’s equivalent to a line of 20 Earth moons, as Caltech explains.

Fortunately, comet NEOWISE survived its journey around the Sun. It’s worth noting that not all comets do: many of them break apart due to thermal and gravitational stresses at such close encounters with the Sun. But comet NEOWISE made it and its nucleus stayed intact. It emerged from behind the Sun on 3 July and got all the fame that it deserved. It was the brightest comet visible in Northern Hemisphere since Hale-Bopp in the mid-1990s. And I think it was also the most photographed and talked-about celestial object in the last two months.

This video displays the rotation of comet C/2020 F3 (NEOWISE) shortly after it passed by the sun. The two images were taken 3 hours apart on August 8, 2020. Two jets emerging from the comet’s nucleus are being fanned out by the comet’s rotation.
Credit: NASA, ESA, Q. Zhang (Caltech), and A. Pagan (STScI)

Zhang and his colleagues applied for and won time on NASA’s Hubble Space Telescope, which allowed them to study the comet in detail, as well as the Sun’s effect on it. On 8 August, they made observations with Hubble that didn’t reveal any of the expected fragmentation. The comet has survived, and if the humans are still here 7 millennia from now – I’m sure there will take plenty more awesome photos of it.